tourniquet to stop heavy bleeding through training by the city's police and fire departments.

matter of seconds,” whether it is students, colleagues or themselves.

Police administration came up with the idea for the training, and Santangelo said he

designed the program. All Berwyn police officers carry tourniquets and have been trained

by the U.S. Department of Homeland Security, he said.

“We always refer to police and fire personnel as first responders. In a school environment,

your teachers are the first-responders," Santangelo said.

with the idea for the training.

Bagus said the school districts think it’s a good thing to be prepared to care in emergency situations.

“I think it’s wonderful," Ayala said. "We have more ways of saving lives.” 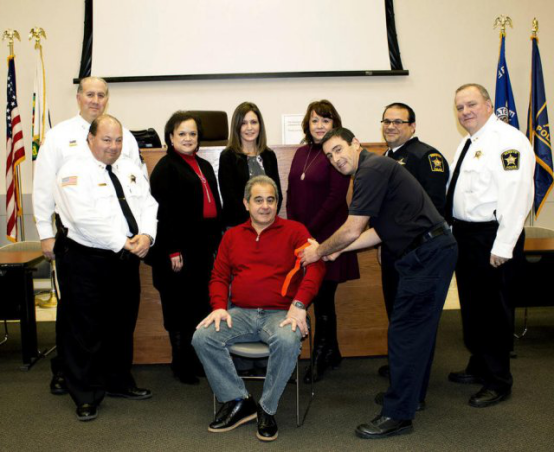 at the police station. It will continue through the year until all employee training is finished.

“We had nothing but positive feedback from the staff we’ve done so far," Santangelo said.

The program is not costing the city any additional money, he said.

The training is done while officers are on duty.

Santangelo said the program will be given to all schools in Berwyn, including Morton West Hig

h School and private schools. Districts 98 and 100 were the first two to come on board, he said.

to use a tourniquet and what items can be substituted for a regular tourniquet.

Another training is scheduled for Feb. 28.

and administrators will be taught in February.

“One of our goals is to get as many of our staff trained in emergency procedures as we can,” she said.

members were trained on and what the police and fire departments use, Ayala said.

would like to have one on each floor, in the red emergency backpack and in a defibrillator.

“We hope we never have to use them," she said.

Santangelo said he personally does not know of any other communities doing this.

Mayor Robert Lovero also is a supporter of the program, he said.

“Each year, medical advancements enable us to keep our children safer," Lovero said in a statement.

"With every passing minute being crucial to whether or not a victim survives,

teachers will be more empowered, having been trained to assist their students and colleagues

in case of an emergency.”