A tornado and hailstorm have killed at least 98 people and injured nearly 800 in the east Chinese
province of Jiangsu, according to state media.

Accompanied by torrential rain, the tornado struck the outskirts of the city of Yancheng on
Thursday afternoon.

The search for survivors in debris has now been completed with a clean-up under way, the
head of the provincial fire corps told state media.

In pictures: Devastating damage in Yancheng 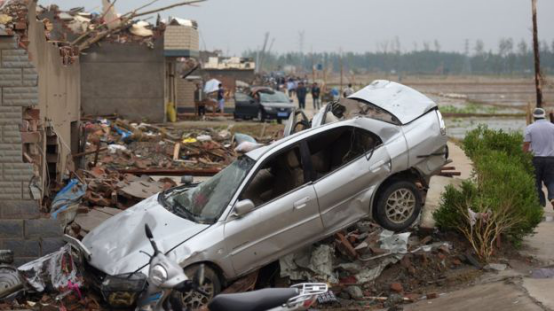 President Xi Jinping had ordered "all-out rescue efforts" after what the Xinhua news agency
said was one of the worst disasters ever to hit Jiangsu.

It was also the worst tornado to hit China in half a century, it said.

At the scene: Robin Brant in Xintu village, near Yancheng

The damage from the tornado has been significant. There were buckled pylons and cables coiled
up by the side of the road on the way to Xintu village.

A woman in her 60s said she'd never seen anything like it; roofs blown off, walls collapsed, cars
submerged in canals, straw stuck in broken windows where the immense winds had blown it.

Families tried to gather what belongings they could in piles around them. 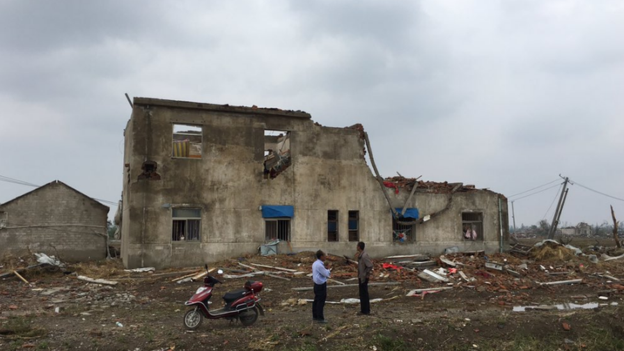 At one end of the village, a couple of men were guiding a big sow, and most of her piglets, out
of a very messy courtyard. They were sleeping inside a pen when half the roof fell down.

At the other end of the row of single-storey houses a family was sifting through the rubble of their
almost vanished home, and mourning the death of their five-year-old boy. He was inside with
his grandmother when the tornado hit.

The boy's uncle tearfully told me the boy had been like a son to him.

On Friday, rescuers were carrying injured villagers into ambulances and delivering food and water
to others, said Xinhua.

Heavy rain and the possibility of more hailstorms and tornadoes had further complicated rescue efforts.

More than 1,300 police officers had been mobilised to help, while tent and other emergency
supplies were being sent from Beijing.

'The end of the world'

"It was like the end of the world," local resident Xie Litian told Xinhua. 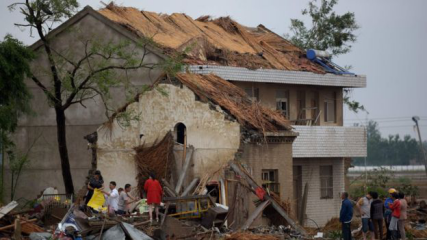 "I heard the gales and ran upstairs to shut the windows. I had hardly reached the top of the stairs
when I heard a boom and saw the entire wall with the windows on it torn away."

Many parts of China have been hit by torrential rains this week.

he southern part of China is hit every year during the monsoon season, which runs from May to July.

But this year's rainy season has been particularly wet, with water levels in some major rivers
exceeding those of 1998, when disastrous floods affected 180 million people, according to state media.

Direct economic losses from the floods are estimated to be 2.7bn yuan ($410m).