The attack in Maiduguri was not immediately claimed by Boko Haram but
bore the hallmarks of the jihadist group which often uses women or girls in
such operations -- especially in Borno state -- the epicentre of their insurgency.

The girls were "seven or eight", a militia member in Maiduguri, the capital of Borno,
Abdulkarim Jabo, told AFP, recalling that he saw the attackers immediately
before the first explosion.

"They got out of a rickshaw and walked right in front of me without showing
the slightest sign of emotion," he said.

"I tried to speak with one of them, in Hausa and in English, but she didn't answer.
I thought they were looking for their mother. 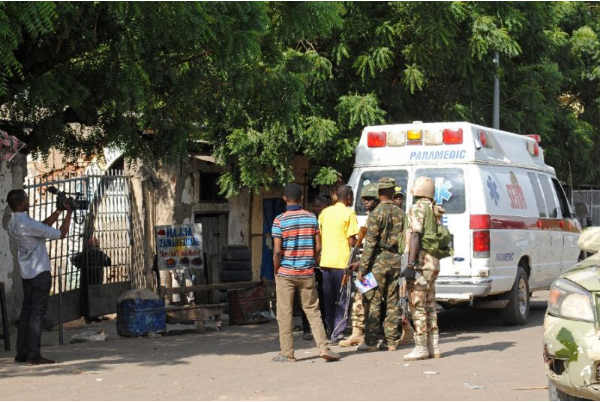 "She headed toward the poultry sellers, and then detonated her explosives belt."

Governor Shettima said he would meet security agents, market officials and civilian
vigilantes -- who are assisting the military -- to try and strengthen security at market places.

The second explosion was apparently triggered slightly later as bystanders were
helping the wounded.

"The mutilated bodies of the two suicide bombers were also evacuated."

Boko Haram jihadists have laid waste to northeast Nigeria since they took up arms
against the government in 2009.

They are seeking to impose a hardline Islamic legal system on the country's
mainly-Muslim north.
At least 20,000 people have been killed and more than two-and-a-half million more
displaced by the unrest.

But the Nigerian military's campaign against the jihadists is increasingly bogged
down as it confronts suicide attacks, looting and indiscriminate slaughter.

Rights groups say thousands of women and girls have been abducted by the group.
In the most infamous incident more than 200 schoolgirls were taken from the remote
town of Chibok in 2014.

The jihadists have used abducted females as sex slaves and human bombs, while
boys are enlisted to fight.

Northeast Nigeria has been buffeted in recent weeks by a string of devastating attacks.