The troubled Houston lawyer, who shot and wounded seven people, was wearing a vintage
military uniform and had a Nazi emblem on him when he was killed by police, officials said.

Nathan DeSai also had two .45 caliber firearms and 2,600 rounds of ammunition as he
peppered morning commuters with bullets near the corner of Law and Weslayan in southwest
Houston, near upscale West University Place.

The shooting lasted about 20 minutes and ended as officers from the Houston, Bellaire and
West University Place police departments returned fire, killing DeSai.

Officials did not say how many times DeSai was hit. 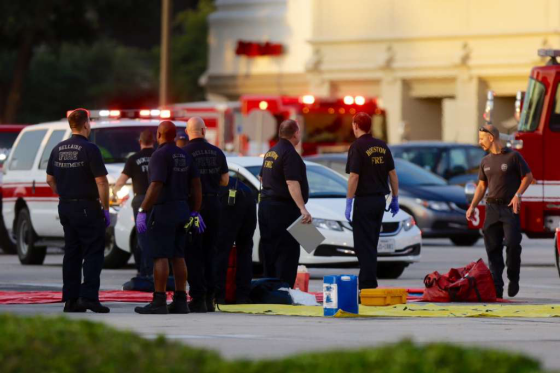 At least 75 spent shell casings were collected from the scene and a bullet slug was pulled from
the couch on the second floor of a nearby home.

DeSai, 46, had been stressed and struggling in recent days and months to keep his small
Houston law practice alive.

Before sunrise Monday, he was dead, lying beside his convertible Porsche and leaving
behind plenty of questions.

No motive for the rampage is known. Nine people were injured in the shooting, one critically.

"As I was driving by Law Street, I suddenly heard a big explosion," recalled Eduardo Andrade,
who was headed to an LA Fitness gym in his Audi A3. "I covered myself, accelerated and tried
to get out of there. I did not know if someone was following me or trying to shoot me."

Two bullets struck his car, with a large piece of one left lodged between his dashboard and windshield.

"It is so random," he continued. "If I were going a little faster or a little slower, the bullet would
have had a different trajectory." 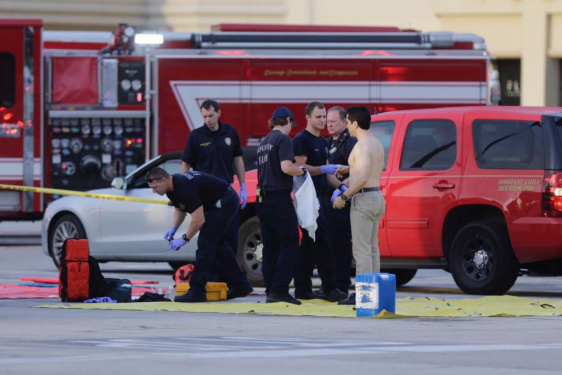 （Images :Law enforcement officers and emergency officials are seen occupying a strip mall in
southwest Houston after a shooting on Sept. 26, 2016. A gunman fired several shots in the area,
injuringa number of people.)

Others told similar stories of brushes with death after pulling into area shopping centers to
seek help.

Houston Police cordoned off the area, and later searched DeSai's condo and car as well
as used a robot to check his body for explosives.

Officials would not say specifically what type uniform he was wearing.

It appeared he had military-style spats strapped over boots. He was lying face up. His dark shirt
was pulled or wind blown up over his face.

Police said his apartment had several pieces of military regalia and other items going back to
the Civil War.

The .45 caliber handgun was bought in 2011. A Thompson submachine gun, which was found
in his car, was purchased in 2009.

He used the handgun in a shootout with police.

The case remained under investigation, with authorities declining to speculate on motive or
discussing those who were injured in the shooting.

Among those who were wounded was the adult son of local lawyer, R. P. Cornelius, who was
resting at home Monday night.

"My son is fine, thank you," Corenilus said. "We are moving forward and do not wish
any interviews."

Police confirmed that all those who were shot during the 20 minute shooting spree were
adults. Six were rushed to hospitals. 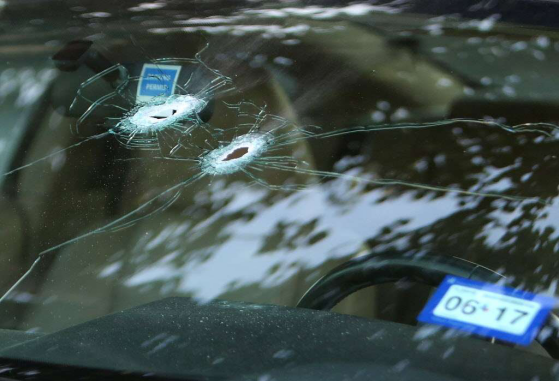 (Image: Bullet holes in the windshield of Alan Wakim's Mustang at the scene of a shooting along
Wesleyan at Law Street that left at least nine people injured and the alleged shooter dead, Sunday
morning, Sept. 25, 2016, in Houston.)

Mayor Sylvester Turner, who was on a trade mission to Cuba, said he'd been advised of the
situation by Montalvo and other officials.

"We wanted to make sure in view of what's happening across country and what's been
happening recently, that this was not some act of terrorism," Turner said, "but one certainly
can see when one has an incident of this kind it certainly creates terror on so many levels."

He said authorities were interviewing Desai's friends, family and associates.

The night before he died, DeSai went by his parent's Houston home.

He was in a hurry, even took his dinner to go, recalled his father Prakash DeSai, a retired geologist.

He said his son had been upset for months over troubles at work, chiefly trying to attract clients.

"We are not getting any business,'" he recalled his son saying. "Who wouldn't be worried?"

"I'm reading stuff online talking about how he was possibly a fired employee that was
disgruntled," said McDaniel, a civil attorney. "That's the farthest thing from the truth. Our
partnership dissolved in February of this year - it was simply a matter of economics.

We couldn't afford to operate as a partnership anymore," he said, adding that he had worked
with DeSai for about 12 years.

He declined to discuss DeSai's personal life, saying he didn't know him outside the office.

DeSai held a bachelors of psychology from the University of Houston and law degree from the
University of Tulsa, where he graduated in 1998, according to the Texas State Bar Association. 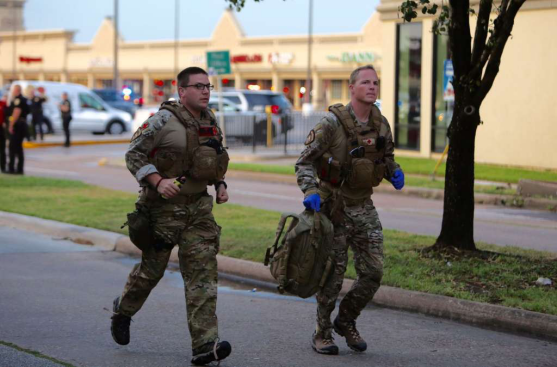 DeSai was in good standing and there was no history of disciplinary trouble or complaints
pending against him. He specialized in criminal, business and family law, according to the bar.

His former law office, off the Katy Freeway, was empty Monday aside from a few trash cans.

Cliff Saunders, a KTRH Radio reporter who lived near DeSai said he avoided him.

"I knew enough to stay away," he said of the man who seemed to have anger issues and would
regularly barrel through the condominium parking lot.

But far more troubling was a phone call he got from his wife this summer about him.

"My wife called me and said, 'don't go home, there is a guy walking around with an AR-15."
he recalled.

He asked her who it was and she said, "the guy with the black Porsche,"

DeSai was apparently angry at some roofers or construction workers who had awakened him.
It is unclear if police responded.

Meanwhile, details of how the rampage turned what should have been typical Monday morning
drives into true nightmares abound.

Just after 7 a.m., Alan Wakim, who lived near DeSai, was wiping dots of blood from his face
as he embraced his wife, Jennifer Molleda.

They stood by his Mustang. Two bullets had broken through the windshield. One landed near
the driver's headrest.

Molleda said she had seen DeSai before, but said that he kept to himself.

"He's very secluded, we've seen him take out the trash a few times," Molleda said. "You normally
say hi to neighbors, but when neighbors don't say hi back, you tend to mind your own business."

Still, Molleda said she would have never expected him to go on a shooting spree.

"He's an attorney for God's sake, driving a Porshe," Molleda said. "He's a prominent individual;
you don't expect this from someone like that."

Carolyn Allen, 76, was driving on Law when a bullet came through the windshield of her Lincoln Navigator.

Though cut on her stomach, legs and face, the retired school teacher kept driving until she thought
she was safe, she said, recalling, "I'm not sitting here like a sitting duck."

When DeSai's father heard early Monday that there had been a shooting in the West University
neighborhood, near his son's condominium, he immediately called his cellphone to check on
him and make sure he was safe.

He said he got no answer, but left a message: "there is a shooting in your area, I am worried."