You are here: Home » News » COMPANY NEWS » How to Stop Bleeding and Save a Life

How to Stop Bleeding and Save a Life

In the commotion immediately after the Las Vegas shooting that killed nearly 60 people on Sunday, medical workers outnumbered by victims pressed bystanders into service to help with emergency first aid.

Just as bystander CPR has become standard, public health agencies are working to increase awareness of bystander first aid. Because trauma victims often die of blood loss, rather than the injury itself, stopping the bleeding is the top priority.

Before help arrives, a bystander on the scene of a shooting or other trauma like a car crash or construction accident may be able to save someone’s life by applying direct pressure to a wound.

“I can’t tell you how many people I told, ‘Take your hand and apply pressure,’” said Glen Simpson, the medical coordinator at the three-day music festival where the shootings occurred.

Since a severe injury can lead to life-threatening blood loss within minutes, time is of the essence, and ordinary citizens who just happen to be nearby are often in the best position to intervene.

Even if you have no medical background, you can master some simple techniques for stopping a bleed by taking an hourlong class, going online or downloading an app.

Contact with another person’s blood can potentially expose you to blood-borne diseases such as H.I.V. and hepatitis B and C. Use gloves if they are available.

“It’s very simple to do, it’s inexpensive and it doesn’t take a lot of time,” said Dr. Lenworth M. Jacobs, a trauma surgeon and director of the trauma institute at Hartford Hospital in Hartford, Conn., who started an initiative to increase survivability after mass shooting events, motivated by the Sandy Hook Elementary School shootings in 2012.

“The name of the game is applying pressure to the bleeding site and keeping the blood inside the body,” Dr. Jacobs said. For victims with wounds on the arms and legs, “If you do that and can get the victim to a trauma center, they have a high likelihood of living.” 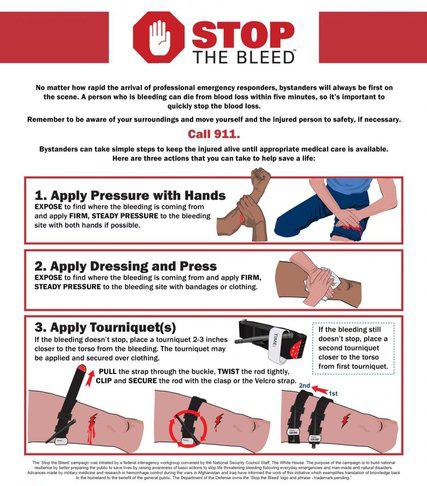 There are several techniques for stopping bleeding.

The first step is to expose the skin so you can see where the bleeding is coming from.

Use one or both hands to maintain firm, steady pressure directly on the bleeding site. You can also use your knee, if necessary, to maintain the pressure.

ond option is to use a bandage or commercial dressing designed to stop bleeding, called a hemostatic dressing, if available, or clothing, to apply firm, steady pressure to the site. 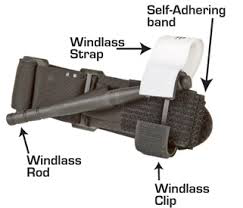 If the victim is suffering from a gunshot to the head or abdomen, you should also apply pressure to stop bleeding, but the victim is less likely to survive, Dr. Jacobs warned.

Be aware that applying pressure on a wound can be very painful to the injured person, and it is important to talk the victim through the procedure and explain that the pain is necessary, and that help is on the way.

“You need to speak to them with kindness and explain it to them and say, ‘Hold on, we’re going to stop the bleeding; we’re going to get you to care.’ That makes a huge difference,” Dr. Jacobs said.

Though some bystanders may be afraid of touching a bleeding gunshot victim, or of causing further pain by improperly tying an improvised tourniquet, experts say that having the training is empowering and provides the tools to take action. The skills can be applied to bleeding injuries of all kinds, from kitchen accidents involving knives to automobile accidents.

In some public places like airport or shopping malls, specialized bleeding control kits that contain hemostatic bandages and tourniquets might be available, but they are not as ubiquitously stocked as automated external defibrillators, which are used to treat people with heart arrhythmias.

Blood loss is extremely dangerous, causing a cascade of medical events, including a drop in body temperature that affects clotting, exacerbating blood loss even further. Once people lose about 20 percent of their blood volume they go into a condition called irreversible shock, Mr. Brooks said. “It’s a downward spiral we can’t recover from.”

Resources include the Department of Homeland Security’s Stop the Bleed website and the American College of Surgeons site, where you can search for a Bleeding Control Basics class in your geographic region. The classes are an hour long and most are offered at no cost.

Educational programs recommended by the Department of Homeland Security include the First Care Provider Program and Until Help Arrives.

The American Red Cross also addresses ways to stop bleeding in its first aid and CPR classes, and has a first aid app that includes information about controlling bleeding.