People need to learn lifesaving skills in case they are caught up in a terror attack in the UK,

a team of senior military and civilian medics has said.

it is deemed safe for paramedics to arrive on the scene.

The idea is supported by counter-terrorism police.

Although an individual's chance of being caught up in an incident is small,

say it is a good idea for people to have a plan and the knowledge and skills to help each other.

Their app, pocket book and website suggest how best to deal with injuries in the immediate

aftermath of a mass shooting or bombing incident.

death in these scenarios.

It guides people through packing, putting pressure on and elevating a wound,

and how to use a tourniquet safely, for example.

what to tell the emergency services once they arrive. 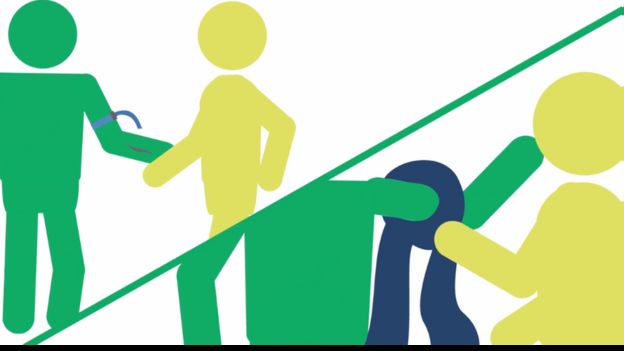 The CitizenAID system says people should follow these steps and then go one step further.

It suggests once people are safe, they should start treating casualties.

told the BBC: "One of the challenges we have is that when a serious incident,

particularly a terrorist incident occurs, the first responders from a police perspective

to a terrorist incident will inevitably be trying to deal with the people causing the threat.

"They won't have time to deal with the people who are injured and that gap is vital to saving people's lives.

"So we are really interested in the concept of CitizenAID. It allows the public and people involved in very rare incidents like this to help themselves and help others and their loved ones survive the situation."

According to its founders, CitizenAID builds on lessons learnt on the battlefield.

told the BBC: "I have treated hundreds of soldiers whose lives have been saved by simply the applications of tourniquets when they have been shot or blown up.

"And I think it is essential we train the public in those skills and that is exactly what CitizenAID does."

need a critical mass of the general public to learn these first aid skills.

"They are the people who are always going to be at the scene.

They are the ones who are going to make a difference."

decisions are already made and the right decisions in the right order can save lives."

The app is free to download and the pocketbook costs £1.99 to order.

Sue Killen, of St John Ambulance, added "First aid can be the difference between

life and death. Knowing basic first aid in a terror attack or in an everyday emergency at home or in the

community, will give you more confidence to deal with a crisis.

that could occur in a terrorist incident including severe bleeding, crush injuries and shock.

"We encourage anyone who would like to learn first aid to go to our website to view our first aid videos,

download our app or attend a first aid course."