A tourniquet is a constricting or compressing device, specifically a bandage, used to control venous and
arterialcirculation to an extremity for a period of time. Pressure is applied circumferentially upon the skin
and underlying tissues of a limb; this pressure is transferred to the walls of vessels, causing them to
become temporarily occluded. It is generally used as a tool for a medical professional in applications such
as cannulation or to stem the flow of traumatic bleeding, especially by military medics. The tourniquet is
usually applied when the patient is in a life-threatening state as a result of continuous bleeding.

A primitive tourniquet can be made from a stick and a rope (or leather belt). The rope is made into a loop
that fits over the damaged limb and the stick is inserted through the loop. The loop is tightened by twisting
the stick. This primitive device stems the flow of blood but side-effects such as tissue damage and nerve
damage may occur. In modern medicine, pre-assembled devices have been developed.They avoid
side-effects of the traditional rope-and-stick tourniquets and can be faster or easier to apply. Some modern
tourniquets, such as the Combat Application Tourniquet or the SOF Tourniquet can be applied with one
hand by the injured person himself. However, it does require some practice to ensure it is applied correctly
and quickly. 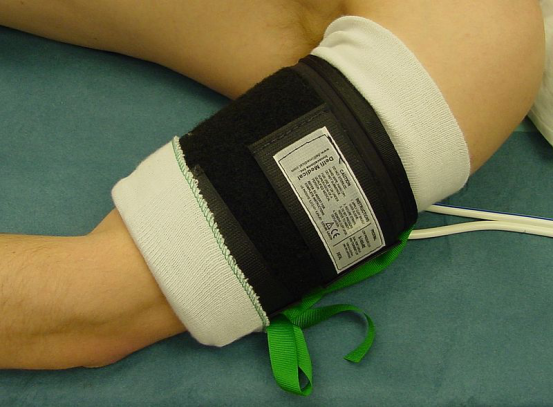